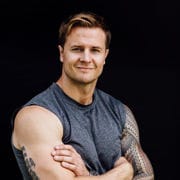 Where would you place yourself on the drinking scale? Are you at the ‘only one sober at weddings’ end, or further toward the ‘haven’t seen a Sunday morning without a hangover in years’ end?

Bobby Holland Hanton was never one to “go crazy” with alcohol. But when our resident stuntman quit drinking for 12 months, he experienced benefits he’d never even considered.

While online alcohol sales surged around the world in 2020, there is also momentum at the other end of the scale, with sobriety becoming all the rage in some circles as booze-free bars pop up and campaigns like Dry January and Dry July gain followers.

At Centr, we’re tolerant of any level of drinking except for excessive. However, cutting back on drinking can be a huge positive for your fitness and wellness goals, as Bobby has learned.

Is there a ‘healthy’ amount of alcohol?

While guidelines and definitions of ‘standard’ drinks vary around the world, generally most experts advise keeping your alcohol intake under 7-10 drinks per week, and capping single sessions at about 3-4 drinks.

However, due to the calories in alcohol and the effect it can have on your diet and fitness routine, we recommend cutting back to a maximum of 2 standard drinks a week while you’re training with Centr.

What happens when you stop drinking?

Let’s go back to the beginning with Bobby.

“I was recovering after surgery on my back, so I was going through a mental battle with that. Then COVID hit. I was struggling,” he explains.

“So I'd have a glass of wine to unwind. I was on painkillers for my back, and mixing the two is never a good idea – especially when you’re not in a good headspace. Eventually, I just decided: enough's enough, I'm going to quit.”

And quit he did, going completely sober for a full year.

While Bobby wasn’t in a good space after surgery, he’d never been a big drinker overall. “On average, I’d have a glass or two with dinner with my wife on Thursday or Friday, maybe Saturday night go out to dinner and have a few more drinks, and then on a Sunday, I'd have a couple of beers with a roast. So on average, let's say 7-8 drinks a week.”

He adds that “the hardest thing about quitting alcohol was that it was a habit. It’s such a cultural and social thing”.

After turning off the tap for a year, Bobby is now back to having 1-2 drinks per week. He says that the last year has been a game-changer in every way.

“I've changed a lot of things for the better and I'm reaping the benefits now,” he says.

What are the best things that happened to Bobby when he quit booze? Let’s dig into his experience.

Going booze-free helped Bobby to unlock the best shape of his life.

Like many of us, Bobby has attempted to train while hungover. “Not intentionally,” he points out, “but you try and push through, then you have a bad session, and even worse, you’re risking injury because you're not moving well.”

If he missed a training session due to a hangover, that had knock-on effects mentally, too. “You feel bad that you haven’t been able to perform or be the best version of yourself.” Now, after changing his relationship with alcohol? “My quality of training is hands down so much better,” he says.

It’s not just your performance that can suffer from overindulging, but your results. Studies have shown that alcohol can inhibit protein synthesis (there go your muscle gains!) and lower your metabolism, reducing your body’s ability to burn fat.

2. His diet got a whole lot better

“I can’t be the first person to say that after you've had one too many, the next day you feel sluggish and you end up eating comfort food to try and make yourself feel a bit better. And that ends up being food that you probably shouldn’t be eating,” Bobby admits.

Bobby’s right. In news that will shock nobody, alcohol lowers your blood sugar and makes you a certain kind of hungry – you crave food with plenty of fat, sugar, and carbs when hungover because that’s the easiest way to get the calories your body wants.

Now with his “massively improved diet”, Bobby is in the best shape of his life. “I’m the leanest and lowest body fat I’ve ever been,” he says.

Psst… Our Smoky Chickpea & Chorizo Flatbread is a healthier way to get the nutrients your body craves after a big night.

3. He’s more in tune with his mental health

“I used to think that maybe I suffered from anxiety,” Bobby says. “But then I quit drinking alcohol, and I found that I wasn’t feeling anxious anymore, which is crazy.”

There’s science behind Bobby’s alcohol-anxiety connection. Alcohol is a depressant, so it slows down your body and brain functioning, which can make you feel more relaxed and less anxious while you’re tipsy. But the next day, your “body registers this new imbalance in brain chemicals and attempts to put things right” by spiking the brain chemicals that cause anxiety.

Now Bobby says: “Mentally I’m in the best place ever.”

4. He’s finally getting some decent sleep

Bobby has had ups and downs with his sleep in the past. “The harder I work, the more tired I am at night and the easier it is to go to sleep. But with traveling all over the world, jet lag, and time differences, it becomes quite difficult.”

It wasn’t just travel messing with Bobby’s rhythms. Studies have found that even just a couple of alcoholic drinks can seriously disrupt your sleep – negatively impacting your immune system, memory, focus, and muscle growth.

“Depending on the drink choices you make, they can also be very sugary,” Bobby points out. “And too much sugar can affect your quality of sleep and keep you awake.”

Now the only thing disrupting his rest are trips to the bathroom, thanks to the increased water he’s drinking. Still, he’s jumping out of bed with a whole lot more to give every day. “One of the most incredible benefits of quitting alcohol was definitely mindset and focus. Waking up in the mornings and not having a heavy head and just being like, ‘Boom! What can I do today to be the best version of myself?’ I felt stronger, healthier, more focused, and got a lot more done.”

If you need urgent support you can call:

USA: The Substance Abuse and Mental Health Services Administration on 800-662-4357.
Australia: The National Alcohol and Other Drug Hotline on 1800 250 015.
England: Drinkline on 0300 123 1110.
Other: Contact your country's substance support hotline, or make an appointment with your doctor.

Bobby Holland Hanton is one of Hollywood’s leading stuntmen, regularly doubling for Chris Hemsworth and making heroes from James Bond to Batman look good. A former gymnast for Great Britain and semi-pro footballer, Bobby is an expert in explosive movement and renowned for his incredible body transformations. His strength and plyo workouts will inspire you to aim higher.

Start your Centr journey with a 7-day free trial

Get Chris Hemsworth's team of the world's best trainers, chefs and well-being experts in your corner.