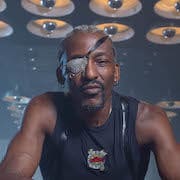 When it comes to fat burning, full body workouts are key. The more muscle that fires up to move or support the body, the more energy is used to fuel the workout. Sometimes people look at shadow boxing and think “that’s just an upper body workout.” Good shadow boxing, however, relies on the calves, glutes, quadriceps, hamstrings and core all working to build a stable platform from which your boxing combinations can be launched. A good shadow boxing workout can have all the energy burning benefits of a gym workout, with next to no equipment.

To get the most out of any boxing combination:

Once you’ve got your legs and core engaged, it’s time to throw some boxing combinations. Here are five that I love when it comes to burning fat:

Throwing fast, repeated uppercuts switches your abdominal muscles on, and keeps them on. Even a short bout of uppercuts should have your abs feeling tight and your shoulders burning.

Switching your stance to southpaw is important to make sure you’re stressing both sides of the body equally. When throwing this combination, focus on using your whole body to propel your fists forward.

In the ring, V-Slips are the most important exercise to practice if you don’t want to take a hit. In the gym, they are one of the best exercises to work the glutes, hamstrings, quads, low back, and abdominals.

Because uppercuts and jabs are thrown from different positions, this combination forces you change your posture continually, working your legs and core just as much as your shoulders and arms.

OK, it’s not boxing, but skipping has been used by boxers for decades to drop weight before a fight and improve leg power. Like shadow boxing, skipping is a full body exercise. Activate your core and lift your heels high to feel the burn in your abs and hamstrings.

Remember, boxing should be a full body exercise. Standing still and lazily throwing your arms is only good for getting yourself hit. Stay low, keep your legs ready to move, keep your core strong, and you’ll be fighting your way to the best fat burning workout you’ve had.

The pioneer of boxing for fitness, Michael Olajide Jr. has trained supermodels and turned actors into on-screen boxers. Famed for his silky moves, he was the No.1 contender for middleweight world champion until an eye injury ended his career. Michael melds shadow boxing, jump rope and HIIT to train the body, and uses ‘the world’s most calming voice’ to train the mind.

Start your Centr journey with a 7-day free trial

Get Chris Hemsworth's team of the world's best trainers, chefs and well-being experts in your corner.